Truck Driver: One of America’s Most Dangerous Jobs

Self Driving Trucks Will Hit the Roads in 2017

Rollover accidents are among the most devastating in passenger vehicle and commercial vehicle accidents. When a tractor trailer rolls over on the highway, it can easily lead to serious injury or death to the driver and other drivers. 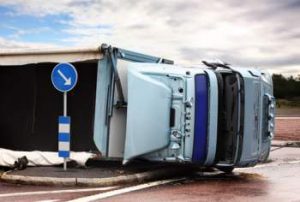 The Federal Motor Carrier Safety Administration (FMCSA) has worked to reduce the incident of rollovers, which are documented to be a more common occurrence with large trucks. More than ten years ago, the Large Truck Crash Causation Study found that tractor-trailers are especially prone to rollover due to the trailer’s high center of gravity and uneven loads. That major study found that most rollovers were the result of driver error, such as driving too fast around curves, misjudging the sharpness of a turn, counter-steering too abruptly, or not adjusting to the high center of gravity. A variety of problems with the truck itself can also increase the risk of rollover, such as poorly maintained brakes, under-inflated tires, and a poorly distributed load.

While improving driver training has been a major part of reducing rollover truck accidents, improving technology is also part of the solution.

system. When the system detects an impending rollover or slide, it cuts the engine’s throttle while applying the brakes to control and slow the truck. An ESC system can detect to an impending rollover in milliseconds and correct the truck within seconds, far faster than any human and usually before the driver can even realize anything has happened.

According to the NHTSA, the rule will prevent 1,424 to 1,759 truck accidents, 505 to 649 injuries, and 40 to 49 fatalities per year with a net cost of $0.1 to $0.6 million per life saved. Along with saving lives, the technology reduces insurance costs for fleets while offering maintenance benefits, including reducing drive train damage to trucks.

If all light vehicles on the road — including passenger cars — are equipped with ESC, NHTSA predicts the technology would save 5,300 to 9,600 lives and prevent up to 238,000 injuries in accidents every year.

NHTSA has said the rule is not intended to preempt state tort law that would impose a higher standard on vehicle manufacturers than established by the rule.

If you are in need of a trucking accident attorney in Delaware contact Edelstein Martin & Nelson – Wilmington for more information.